Published on Monday, April 16, 2018
This article was tagged under: Case Study 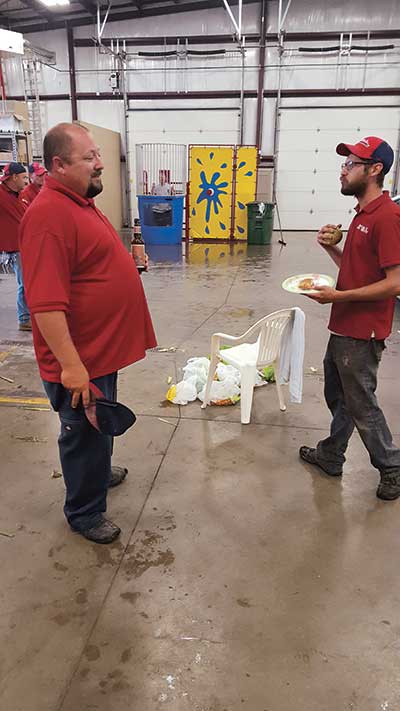 Why one landscape company turned a one-time thing into a monthly event.

What started as a one-time celebration to reward the team for a job well done has turned into a monthly event for A+ Lawn & Landscape, headquartered in Des Moines, Iowa.

A few years ago after a good month, management rewarded the team with a barbecue. It was a hit—more well-received than anyone anticipated.

According to Shawn Edwards, managing partner, the feedback was, “I wish we did this every month,” which prompted the company to make team dinners a recurring event.

That was five years ago. Edwards says the monthly tradition continues, but now it’s more about showing thanks than giving a reward.

“After the success of the first dinner, we started doing it as a monthly event but for no reason—just to show our appreciation,” Edwards says. “When you start tying it to numbers or having to hit a certain mark, we decided it loses something. It’s not the same as just showing appreciation. We wanted show them how much we care.”

Each month A+ has a theme dinner—it could be hot dog night, soup night or something else—cooked and served by management for the rest of the team. When the company tried Mexican night, Edwards says they decided to have it catered since it would be complicated. Surprisingly, despite the delicious food, bringing in a caterer all but ruined the event, Edwards says.

“That was something we learned—one of the things the employees liked so much about the dinner was the managers and the owners cooking for them,” Edwards says. “(When it was catered) the interaction between management and employees just wasn’t the same. The real key is that we’re out there cooking for them.”

Employees are off the clock during the dinners, which usually start at 3:30 p.m. “Most eat and play to win prizes,” he says. Each dinner features contests (think: water balloon tosses) for a $25 gift certificate. One requirement is employees must pair up with someone from a different department.

“With 100-plus employees, there’s not a lot of opportunity to get to know people outside of your department other than this monthly event,” Edwards says. “It’s been really great for2 building our team culture and having the departments work better together.”

For other businesses considering a monthly team dinner, Edwards says the key to success is “participation.” It’s easy for employees to stand on the sidelines, but it’s important that everyone joins in, he says.

“We basically say they can’t eat till they play,” Edwards says, laughing. “Honestly, the event loses something if people aren’t getting involved, so you have to find a way to get everyone to play the games and participate in the fun.”

Overall, Edwards considers these events to be a small monetary investment—about $8 a head. The real investment is the time involved. But that’s also what makes it special, Edwards says.

“It’s the owners and managers giving their time to cook and participate in the dinner and games that makes this event such a hit with the employees,” he says. “It opens doors—letting management get to know their people and vice versa. That’s really important to the success of your company culture.”

Thanks for your feedback! Your comments have been successfully submitted! Please note, all comments require admin approval prior to display.

There is a problem with your comment, please see below and try again.

There have not been any comments left on this post.